The Crypt is the real heart of Amalfi, because this is where the relics of the body of St. Andrew – the first disciple of Jesus – are kept. The Apostle, who brought the word of God to Greece and travelled as far as what is now Russia, was crucified in the Greek city of Patras. From there, his body was first taken to Costantinople and then, during the Fourth Crusade, it was brought to Amalfi, thanks to the papal legate Cardinal Pietro Capuano. The relics arrived here on May 8th 1208 and they were welcomed by a festive population. They were secreted in the Crypt, which had been built under the auspices of Cardinal Capuano, in a style which differed from the present one. In a lunette by the steps is a 17th century fresco depicting the arrival of the relics in Amalfi and the first miracle attributed to Saint Andrew here.
Beneath the main altar is a crystal ampule, in which, on the vigil of the Saint’s Feast Day and sometimes on other occasions, a substance called “Manna” is collected. It is a dense liquid which sweats out from the tomb of the Apostle. This event occurred in Patras and in Costantinople and it has been happening in Amalfi for 750 years. For the local people it represents a “sign” which always inspires sentiments of deep spirituality.
The back of the skull of St. Andrew is currently kept in the Reconciliation Chapel in the right apse of the Cathedral, so it can be venerated by the faithful.
Today the Crypt has the Late-Mannerist style given to it in the 17th century at the bidding of Phillip III, King of Spain. You can admire the vault with frescoes representing the Passion of Christ, which are framed by rich, elegant, gilt stucco-work by an artist from nearby Scala, called Vincenzo de Pino, who was a collaborator of the more famous Belisario Corenzio. The new architectural structure, which substituted the 13th century one, was projected by the court architect Domenico Fontana. The central altar has a large bronze sculpture representing St. Andrew the Apostle, made by Michelangelo Naccherino, flanked by a pair of marble statues representing St. Stephen and St. Lawrence, the proto-deacons of the Western and Eastern Church, by Pietro Bernini, father of Gian Lorenzo. Behind the altar are two large images of St. John the Baptist and St. Andrew, which were painted on marble during the 17th century.
“ 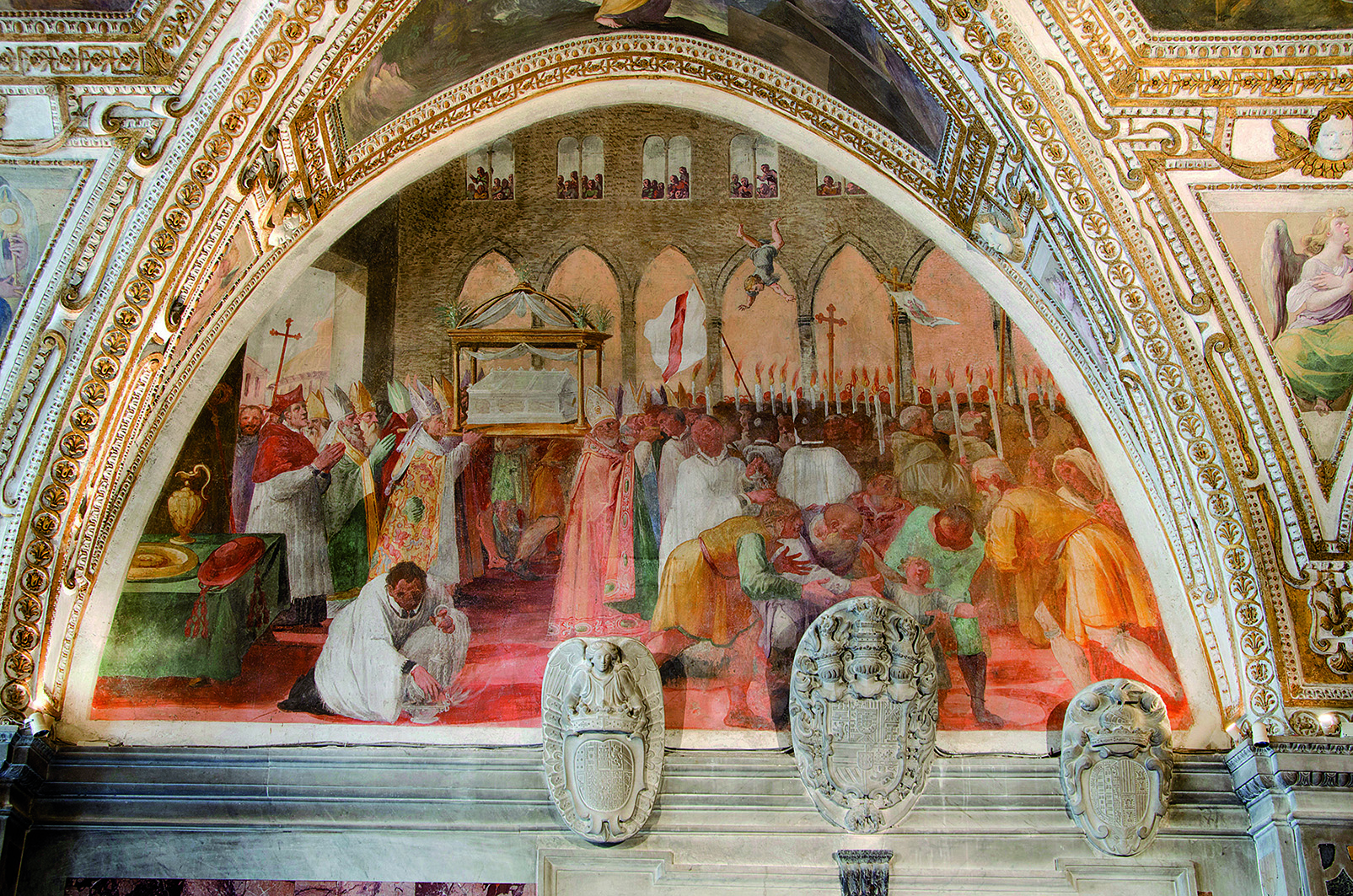