The pastoral visit carried out in 1486 by Bishop Andrew de Cunto shows that, at the foot of the nave of Sts. Cosman e Damian (the present chapel of the Crucifix), two chapels were built by Archbishop Andrea de Alaneo in 1324.These currently constitute a single rectangular chapel, which can be accessed through two arches discharging, in the middle, on twin columns topped with capitals. The hall consists of two bays
covered by cross vaults, is entirely covered by a fresco decoration, the result of
numerous layers ranging from the 14th to the15th century. On the left wall,
below the added panel, the oldest frescoes of early 14th century, are visible, depicting
in the upper register an angel bearing a cartouche, in the lower, a Saint with a sword. At this same stage seems to belong the upper frame, consisting of illusionistic
shelves, which can be found in the counter-façade of the right, where there is fragment of a Saint. On the panel presumably added in the late 14th century there was a Virgin enthroned, and the Annunciation, of which only the announcing angel in the clypeus, the robe of the Virgin Mary and a Saint on the lower side, remained.
The front wall of the left bay is occupied by framed: in the upper register are depicted two Saints, of whom only the figure of Saint Anthony the Abbot is recognizable, both are assignable to the early 15th century; in the lower frame survives a crowned Saint lacking
iconographic attributes, but preserving the 14th century features.
On the front right wall emerges the figure of Saint Francis receiving the stigmata,
on which, in part, was superimposed  one layer of paint incorporating fragments of architecture. This wall stops abruptly for the introduction of a crossing wing that close the chapel, cutting off the upper vault.
On it, the decoration, highly abraded, develops three horizontal registers: the coronation of the Virgin appears at the top, in a mid-face a Maiestas Domini surrounded by legions of angels and at the bottom three Saints and a Saint Bishop, without attributes that make them
recognizable. Studies focused on these  frescoes consider them of cavalliniana culture, taking a tight relationship with
the Neapolitan cycle of Santa Maria Donnaregina, made starting from 1320.
Very well preserved are the images of two Saints on the straight side of the right arch, one bearing a crusader banner, the other a sword, according to the tradition identified with Gerardo Sasso di Scala, founder of the order of Malta. 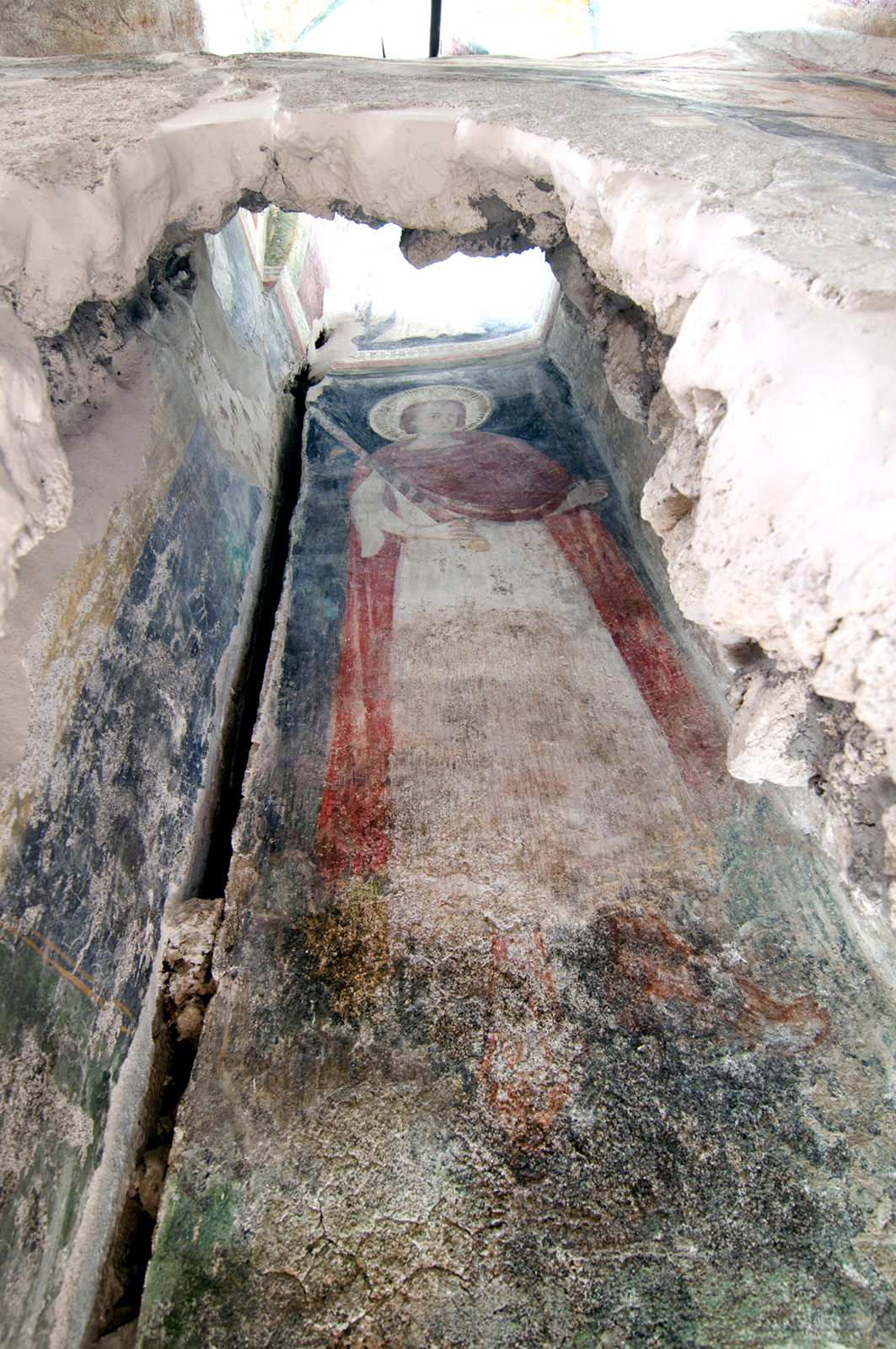