The current baroque style, imposed by the Archbishop Michele Bologna at the beginning of the 18th century, has almost cancelled the original Romanesque structure. The polychrome marble, the richly panelled ceiling with a large canvas exalting the figure of Andrew the Apostle, offer the visitor a wonderful inspiring spectacle.
The four large canvases in the vault of the central nave were executed at the beginning of the 18th century by Andrea D’Aste, a follower of Francesco Solimena, and they represent scenes from Saint Andrew’s life: The Flagellation; The Crucifixion; The Miracle of the Manna and The Deposition in the Tomb. The painting of The Crucifixion of St. Andrew above the main altar is by the same artist, but the two in the transept, representing The Vocation and The Miraculous Draught of Fish, were executed by a Neapolitan painter called Giuseppe Castellano. At the centre of the liturgical area is the 14th century marble sarcophagus of the Archbishop Pietro Capuano, which is utilized as the “new” post-Council altar and is flanked by two candelabras made from Solomonic columns decorated with spiraling 13th century mosaics. During the 17th century two marble pulpits were built in proximity to the main apse, re-using marble slabs decorated with mosaics from the ancient ambone.
The 17th century Chapel of the Canonical Choir, at the end of the right nave, is now used as a lipsanotheca, or reliquary chapel, and holds a large number of 17th and 18th century sculpture-reliquaries.
Of particular interest are the two chapels either side of the entrance to the church. The one on the right has an elegant marble altarpiece with fine subtle stiacciato reliefs and statues of “St. John the Baptist” and “St. John the Evangelist”, realized between the end of the 15th and the beginning of the 16th century. The one on the left was completely frescoed during the 18th century and contains a large basin of red Egyptian porphyry brought from the Ancient Greek colony of Paestum and used as a baptismal font.
Above the entrance to the left nave is a large painting which commemorates a miracle attributed to Saints Andrew and Matthew, who provoked a sudden storm which drove away and sank the fleet of the pirate Ariadeno Barbarossa, who was attacking Amalfi and Salerno. Since that time, on June 27th, a grand feast is celebrated in Amalfi.
In the side niches of the same aisle, are a 17th century silver and copper bust of St. Andrew and a catafalque bearing a sculpture of the dead Christ, which is used on Good Friday for a moving celebratory procession along the streets of Amalfi. 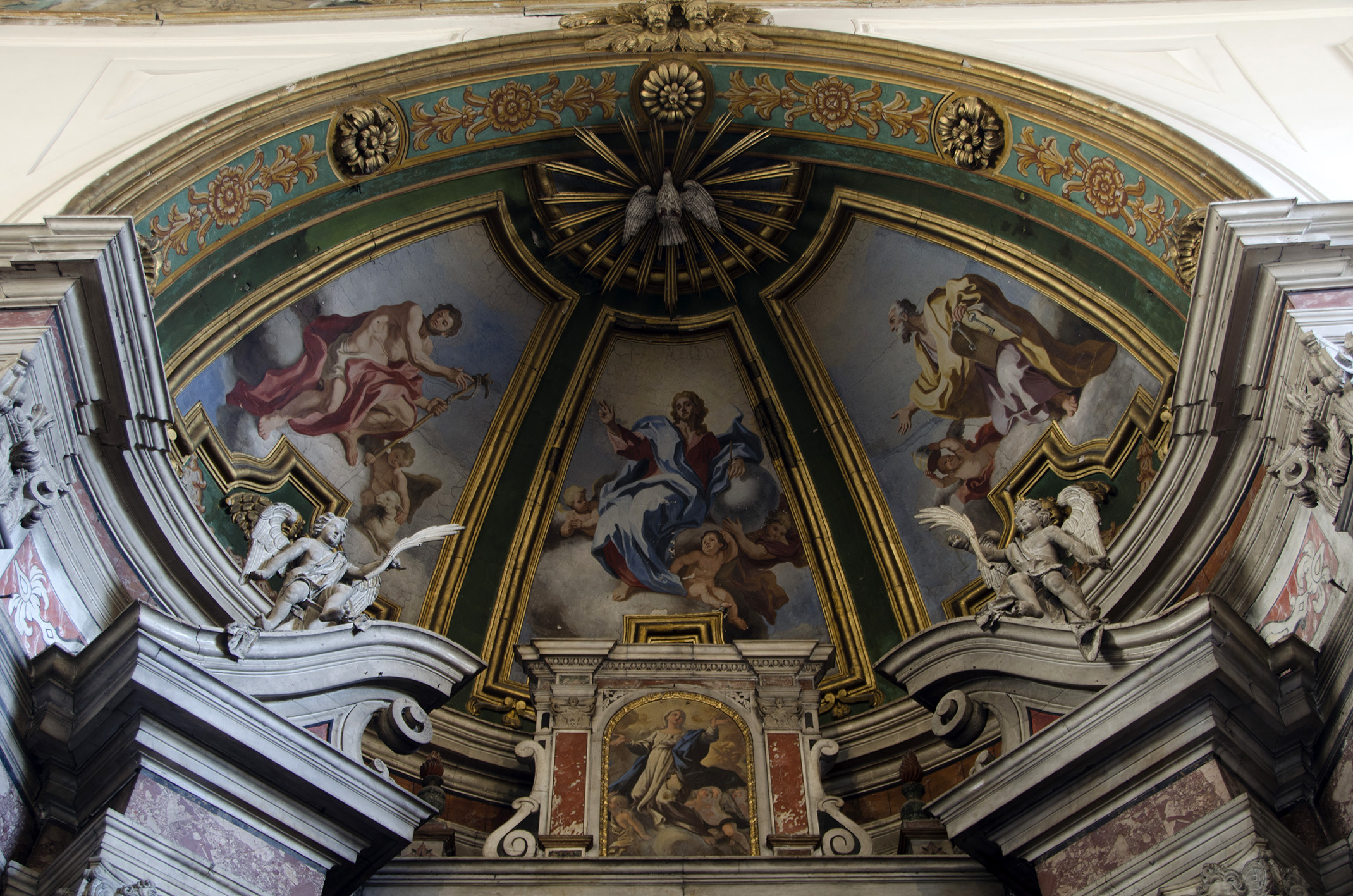